Rolling on the River Bus – New Service Opens to Public

With over 19,000 passengers stepping on board within the first eight weeks of launch, Barking Riverside Pier and its scheduled services by Uber Boat by Thames Clippers have already proved a resounding success.

Working with our partners, we were pleased to be able to bring the opening of the service forward to 25 April 2022. This allowed residents and visitors alike to make use of the service throughout the Jubilee celebrations in May, with almost 4,000 passengers using the Pier across the Bank Holiday weekend. Notably, there has also been steady use by passengers during the weekdays, with commuters accessing Canary Wharf and other central London locations for work.

Resident Belinda moved into her new house at Barking Riverside in December. She explains: “This is a gamechanger for me because I work in Canary Wharf. It will cut my commute from a one-hour journey with four changes, to just 40 minutes direct! And with such scenic views! I’ve been telling all my colleagues that from tomorrow, they’ll see me arrive to work by boat.”

Mary has lived in Dagenham for 50 years. She remembers coming to this stretch of riverfront with her mother, a teacher working in Tower Hill. “This is making me realise how much there is to see on the Thames. I’ve already invited my son and grandchildren to take a river trip with me.

“This is going to help improve the image of Dagenham. It’ll move us on from feeling we are on the edge of the city and that we are not involved with the rest of London.”

Further celebrating this infrastructure landmark and this reinvigorated connection to the Thames, Barking Riverside Limited welcomed stakeholders aboard the Uber Boat by Thames Clippers service early in July.

Seb Dance said that the expansion of the river bus service by 4km to this previously underdeveloped area of the Thames is a tremendous new facility. This, combined with the forthcoming opening of the Barking Riverside London Overground service will offer fantastic transport options.

Tom Copley commented that the Uber Boat by Thames Clippers service was the best way to see London and one of the best ways to travel – and the growing passenger numbers show that Barking Riverside is a place that people want to visit. 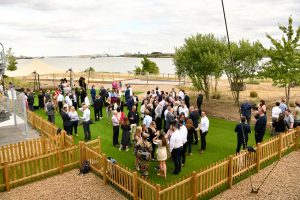 Good partnership was also a key theme on the day, with Matt Carpen highlighting the partnership working with Uber Boat by Thames Clippers and all the contractors involved, and Vicky Savage, describing how Barking Riverside is the result of a productive and trusted partnership between L&Q and the Mayor of London.

Later in July, we hosted a Pier Community Day for residents, with fun family friendly activities such as rope throwing, naval themed origami making, and sessions on the riverside ecology and historical heritage of this section of the River Thames. Over 350 residents came down to the pier and made the most of the day.

The brand-new Barking Riverside Pier is now the most eastern stop on Uber Boat by Thames Clippers’ RB1 route, creating a much-needed link between the north and south of the river, with journeys to Woolwich taking just nine minutes, providing a fast and effective link to the newly opened Elizabeth line.

The service runs at peak hours Monday to Friday, and all-day during weekends, with a 20- to 30-minute frequency.

Find out more about transport at Barking Riverside.

A group of resident Community Researchers has been creating an ‘impact report’ into the success of our award-winning social impact framework, Thames Futures.