Full Steam Ahead for the Barking Riverside Overground Station 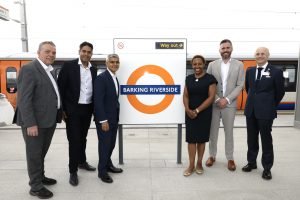 We were excited to attend the opening of the Barking Riverside Overground Station this Summer, months ahead of the planned schedule. The station officially opened to the public on Monday 18 July 2022, with the commencement of services from the new train station marking a hugely significant milestone for the project.

The official launch saw senior dignitaries, stakeholders, partners and friends and family of the project join our team at the new station. They joined the first ever journey in the front carriage of the train, marking the service as "Open to the public".

The Mayor of London, Sadiq Khan, toured the new station on Monday 25th July, together with the Commissioner of Transport for London Andy Byford; Jacqueline Esimaje-Heath, Director of Development Growth at L&Q, and other senior dignitaries including Tricia Ashton, TfL; Seb Dance, and Tom Copley, both GLA; and Councillor Darren Rodwell.

Later in the year, we are planning a celebration event in Station Square, inviting members of the public and community groups to formally mark the opening with us. 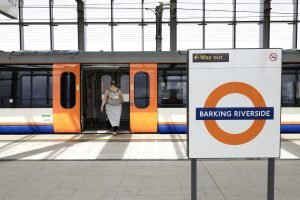 The Barking Riverside extension has added 4.5km to the London Overground Gospel Oak to Barking line. The extension operates four trains per hour from Barking Riverside station, operated by Arriva Rail London, and reaches the opposite end of the line in north-west London in just 45 minutes.

The new Overground Station has significantly reduced journey times into central London for residents and visitors, reaching Barking Station in as little as 7 minutes - with high profile transport blogger Geoff Marshall claiming a journey time of just 5 minutes 35 seconds on his first visit. It will provide direct access to the Hammersmith and City Line, the District Line, and c2c services from Essex to Fenchurch Street. Sitting at the heart of a new public square, the new Barking Riverside step-free station provides a direct interchange with local bus services, and will be a five-minute walk from the riverfront, which is served by Uber Boat by Thames Clippers river bus services.

The result of a long-term partnership between BRL, TfL, LBBD and MSVF, we are proud to deliver this new facility for residents and visitors. The station will enable thousands of Barking Riverside residents to travel across the capital more easily, whilst also unlocking the area for more Londoners to visit Barking Riverside, and providing access to thousands of jobs.

Find out more about transport at Barking Riverside.